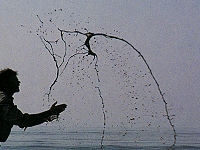 I Knocking on Heaven's Gates: Reflections on Immanuel Kant's Kingdom of Ends in the Age of Computers

II The Guardian of Sleep

Is the human brain a useful model for a thinking machine? We used to think so.

For hundreds of years we've imagined recreating ourselves, or at least our rational selves, in computing devices, and in the last sixty years we've actually begun to do it. The metaphorical imagination works in both directions, of course: The language we use to describe our new creation now permeates discussions about how our own brains work. When we hear talk of neural networks and memory banks, parallel processing, and "down time", we can no longer be sure exactly who is talking- neurophysiologists or computer scientists. A sort of mirroring is going on. We are examining ourselves through the very challenge of making these extraordinary machines. And we are at the point now where some people wonder how much longer it will be before the machines start examining us. Increasingly, both brains and computers are viewed as sharing a fundamentally similar design.

"We as human beings may use a parallel algorithmic processing device with multiple specialized sub-processors but like living things themselves, the whole is more than the sum of its parts... This quote is from an amazon.com reader's review of Daniel Dennett's Darwin's Dangerous Idea. George Dyson, in Darwin Among the Machines, puts it more concretely: "Turing developed the concept of 'unorganized Machines'... He considered a simple model with units capable of two possible states connected by two inputs and one output each, concluding that 'machines of this character can behave in a very complicated manner when the number of units is large.' [which is] ('about the simplest model of a nervous system')... [It] could be made self-modifying and, with proper upbringing, could become more complicated than anything that could be otherwise engineered."

But there are differences between brains and computers. One of the least discussed is that brains are a computing device that requires sleep.

It seems to me that anyone looking for clues about how natural intelligence works would take sleeping and dreaming very seriously. They would ask what role these states play in the deep structure of the biology of intelligence. They would ask if there are processes they mediate that our minds require, processes that go beyond maintaining our flesh to specifically enhancing our range of thought. For example, the sleep stage during which we dream (REM) appears to be necessary for the proper development of the maturing brain, but does it also play a direct role in the intelligence that the mature brain enables?

Right now artificial intelligence folks work on programming solutions to deterministic games that enable processors to learn in a universe of shifting “fitness functions”. These games and modes of learning are analogous to what we do when we "reason a problem through", which is how we thought to apply them to machines in the first place. For example, computers can be programmed to explore the classic human question, "how does that work?" by initiating a series of Boolean logic statements of the form: "If....then...., else......".

But are we on the verge of creating flexible machines that can not only learn, but also anticipate and self-correct?

Are we initiating processes that may create an "inner voice" for our computers, a voice that listens to a "self"?

In asking these questions I am in the firm grip of my own metaphorical imagination. I want to examine not only my rational self, but my intuitive self. I want to understand any claims that my physical brain enables mind, and may eventually be understood to enable something resembling "self" or "soul" as well.

The following are a selection of articles and books touching on the issues raised above. These are all "popular" accounts, written for the general public, for peole who have no special expertise in any of these areas. As I read them I am creating "Abstracts" in the form of collapsible outlines of (mostly) direct quotes, together with my own bracketed [...] comments, using UserLand's Frontier scripting program. Unfortunately the collapsible feature of these outlines cannot yet be rendered on the Web, but I will continue to post them here as a resource for myself and for any visitors interested in these topics.

To reach an abstract, click on the reference title.

The Mind's Past by Michael Gazzaniga. University of California Press, 1998

The author is an eminent neurophysiologist who's done lots of work with split brain patients. In an era, now ended, when cutting the bridge of tissue connecting the brain's two hemispheres was a treatment for epilepsy, he took advantage of these "natural experiments" to examine brain function.

His great discovery is our left brain's Interpreter. Is dreaming our Interpreter hard at work, displaying its most consummate artistry?

Dr. Lavie is the head of the Sleep Laboratory and a professor of Biological Psychiatry at the Technion-Israel Institute of Technology in Haifa. His book provides insights about the impact of sleep on intelligence. Here are some of the questions I brought to my reading:

The author, a journalist, asks eminent sleep experts what is sleep for. The article's last paragraph is most provocative. Reflecting on research suggesting that "We've jettisoned 6 hours of quiet winter rest" each winter night, the author quotes one source as follows:

" 'It is tempting to speculate,' Wehr writes, 'that in prehistoric times this arrangement [14 hours of sleep/semi-sleep] provided a channel of communication between dreams and waking life that has gradually been closed off as humans have compressed and consolidated their sleep.

" 'If so, then this alteration might provide a physiological explanation for the observation that modern humans seem to have lost touch with the wellspring of myths and fantasies.' "

An interview with researchers who program Field Programmable Gate Array chips.(FPGA's) to process evolutionary algorithms. The goal is to develop self-evolving hardware by having it solve problems.

Darwin Among the Machines by George B. Dyson, Perseum Books, 1997.

A wonderfully provocative and readable book that explores the idea that mind is a result of simple selective rules at work amongst simple entities such as neurons or circuits. Evolution works upon this simplicity to give rise to mind, which is entities self-organizing into networks.

Throughout Dyson explores this great mystery:

Photo at Top of this page is "Wet sand cupped, squeezed, thrown out of water" from Stone by Andy Goldsworthy. Goldsworthy arranges natural objects into beautiful patterns and then photographs them. "I need to understand the nature that is in all things. Stone is wood, water, earth, grass.."

This particular photograph is attributed to Judith Goldsworthy. Perhaps it's a picture of the artist, playing.

Email any comments or questions to lpark@123compute.net